Following a 3-year gap between our last visit, a K180 team recently ventured back to the town of Bohumín (in the eastern region of the Czech Republic) to aid a local church in reaching their community with the Gospel. Members of the congregation were pleased to welcome us and expressed their excitement at being able to reconnect with those of our team who had visited in previous years. It was a particularly special reunion for us and key contact Miriam Paszova, as she formerly served with K180 in a trainee capacity, remaining close to the ministry in the years since.

Shortly after our arrival, we set to work alongside Miriam, Pastor Roman, and a team of volunteers, to invite local people to events that were due to take place across the weekend. Aided by translators/interpreters, we had a variety of encouraging opportunities to connect with people on the streets – particularly with a man named John*. After having been invited to the church’s BBQ, which took place later that day, John attended and spoke with team members Steve & Miriam. He shared openly about some difficult issues that he'd recently been facing, which prompted Steve & Miriam to share about God's goodness to us. Those in attendance then watched and listened intently, as Scott & Steven shared testimony and a Gospel message, respectively.

*Name has been changed for privacy.
​
​Later on in the mission, we met with groups of children from a local school in a park, close to the church. Steve taught them a song about the peace of Jesus, and an opportunity for group discussion with the children led to Gospel conversations and the team inviting the children to a youth evening, later that day. A group of those young people later attended the gathering, and heard the Gospel preached using the ‘Chemical Cross’ illustration. This then prompted several conversations following the gathering, and various young people then took New Testaments away with them.

We thank God that this trip not only encouraged the church, but also our team, as we saw God move powerfully in the lives of those around us. We entrust all those we connected with to the Lord, and trust that the seeds which have been sown, will grow in His time. May the Lord bless the church there and help them to continue being faithful in their call to make disciples. 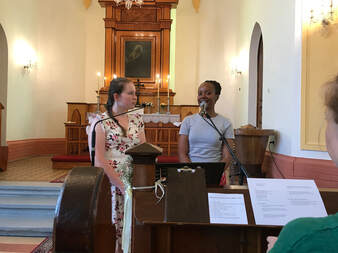 A team of four - including Jana, a 2016 K180 trainee who lives near Bohumín - visited Miriam, Pastor Roman and the church of Bohumín once again in May 2018 (see the Big 3 webpage for details of the 2016 mission). We received a warm welcome from the youth and leaders with whom we spent much of the weekend, training and venturing into the town and parks to initiate gospel conversations.
We partnered with the youth in hosting an British Evening for the community who were invited to enjoy tea and scones, hear about the royal wedding, and listen to testimony about Jesus.
We were also able to join in on the Bikers’ Blessing which drew around 250 people in from the bikers’ & local communities. We were given the opportunity to preach to all of them about the freedom Jesus paid for on the cross.
While many in the community were quick to assert that they did not believe in God, once in conversation, many softened on that stance and ultimately acknowledged the possibility of the claims of Jesus. Join us in praying for the church there and the continued softening of hearts in Bohumín!